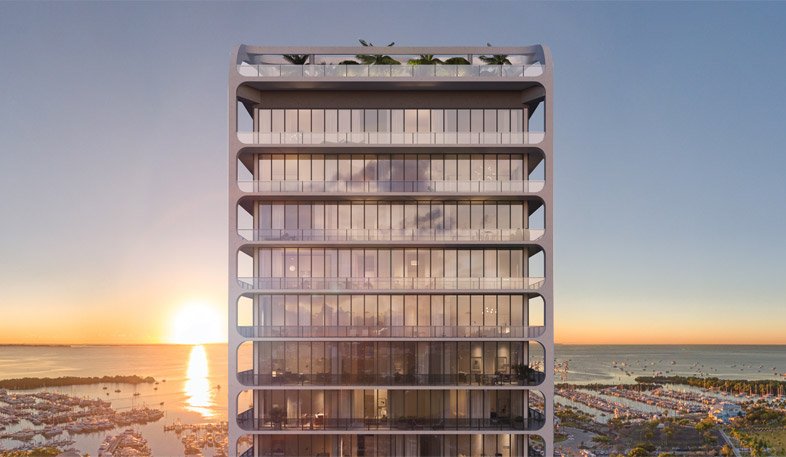 Imagine living in a condominium building and getting all the services of a high-end hotel.

That’s exactly what residents can expect at a condo tower planned in Miami’s Coconut Grove.
Prolific developer Terra Group LLC is partnering with the Mr. C hotel company on the residential tower that will offer hospitality-style services to residents.

The 121-unit Mr. C Residences-branded condo will rise on Bayshore Drive where an apartment building was demolished. The 1.5-acre lot is at 2655 S. Bayshore Dr., southwest of a Courtyard by Marriott hotel.

“This project marks a major milestone in response to how we live today,” David Martin, Terra president, said in a news release. “People are looking for more thoughtful, full-service solutions set in a prime walkable location for effortless living.”

Martin and his father, Pedro Martin, co-founded and lead Terra. The company already has two other condo projects in the Grove: Grove at Grand Bay and Park Grove.

This is Mr. C’s first big residential project. The hotel company was founded by brothers Ignazio and Maggio Cipriani. The Ciprianis are known for their restaurants, event spaces and residential projects.
The brothers created Mr. C with an eye toward modernizing classical European design. Mr. C’s flagship hotel is the Mr. C Beverly Hills, which opened in 2011.

Terra demolished a seven-story, 97-unit apartment building on the site where Mr. C Residences will rise. Terra turned in to the city a plan for a 20-story, twin-tower project. The Miami Urban Development Review Board approved the project in July 2018.

Terra now revealed the plan for the 20-story Mr. C Residences condo with ground-floor retail. It still plans a second 20-story tower on the site and it also will be Mr. C branded, but the tower concept isn’t final.

Arquitectonica’s Raymond Fort is leading the condo design, which will have a maritime motif and feel. Finishes include laminated wood paneling and nautical blues as well as a pink-and-mustard color palette.

Condo sales for Mr. C Residences are to start by year’s end, although pricing isn’t yet available.

Terra is fond of Coconut Grove, and David Martin called it “the most desirable address in Miami” in a news release. The developer also is finishing its new headquarters on Mary Street in Coconut Grove.